Meet me in St. Louis.

Judy Garland from the movie soundtrack.

Guy Lombardo and his Royal Canadians.

Our last day was not long but it was eventful.  As we were unloading our bikes from the Treolar trailhead, a van pulled up with Illinois plates and out came four ladies of a certain age (our age or older, it looked).  Two took out some pretty good looking road bikes and tooled off.  We thought we could catch up with them easily, but after five miles were disabused of that idea.  Gene finally caught up with the slower of the two, who told him that she was celebrating her 80th birthday by riding the length of the trail the second time (the first had been to celebrate her 75th birthday).  Her companion, who disappeared like a shot after leaving Treolar, was a mere 73.  The other two ladies in the car were a friend, and the mother of the 73 year old lady. They were from downstate Illinois, regularly rode with a group of friends, and considered this a pleasant spring trip.  The four ladies met up at the next trailhead for tea and pastries.  That was inspiring.  But the bike repair shop owner in Sedalia told us that the oldest rider he’d heard about was 93 years old, an former bicycle racer, who completed the whole trail in 3 days.  It took us five.

I was surprised when what looked like a black tree limb started to slither across the trail.  It was about six inches in diameter, and perhaps 4 feet long.  Not wanting to find out more, I ran over and either killed or maimed what Gene told me later was a deadly water moccasin.

A couple of miles farther, Gene saw and photographed a copperhead sunning itself on the trail.

Onward.  Augusta has many interesting shops, galleries and restaurants to explore.

The trail signs included menus for some of the restaurants

and a sign at the trail invited you to explore more.

The trail then went through an area that was completely isolated from roads and improvements, or any sign of civilization.  The vegetation reminded me of photos of a tropical rain forest.

Matson, Defiance, Weldon Spring passed by quickly.  We knew we were approaching St. Louis because the number of riders, joggers and walkers on the trail increased dramatically.  At Defiance, the water was off at the trailhead, but a few feet from the trail, we stopped at Terry & Kathy’s Tavern, and Kathy filled our water bottles with a smile.

The area became more industrial, although since we were on a former railroad track, it was hard to tell where we were.  But the two road overpasses from St. Charles to St. Louis made it clear that we were nearly done.  Apparently, you can ride on one of them, but not the I-70 bridge.

Our adventure ended in St. Charles, at the Lewis & Clark Museum.  I noticed with interest that the parking lots had several trucks, busses and vans from the tour companies that provide Katy Trail shuttle services.  But the black skies to the southwest and the winds suggested that we ought to wait in the entrance for the museum.  Good idea; a rain – the first we’d encountered – hit a few minutes after we had arrived.

We put the bikes on the rack, gave a thumbs up, and our adventure was done.  There’s a story about the jersey I wore.  Ask me about it sometime.

In June, 2017, we attended the memorial service for  Warren Humble, a good friend from Rifle.  At the service, his wife mentioned how much she and Warren had enjoyed their rail trail bike trips, starting with the Katy Trail in Missouri.  Gene Byrne, another friend from Rifle, and I talked about it later, and as it turns out, both of us wanted to ride the trail…so we talked over the winter and planned it. Our wives, Georgia and Maggie, agreed to accompany us and be our sag wagons.  We decided to meet up in Kansas City and ride at least some of the new Rock Island Spur to the Katy Trail to St. Louis.  Unfortunately, the trail won’t go all the way, but it is close.

We decided that we were a bit beyond the camping stage, so I found several AirBnBs along the way, and we alternated them with hotels.

As one of the oldest and longest rail-trail conversions, there’s a lot of material available online and by mail on the Katy Trail.  Almost too much information. 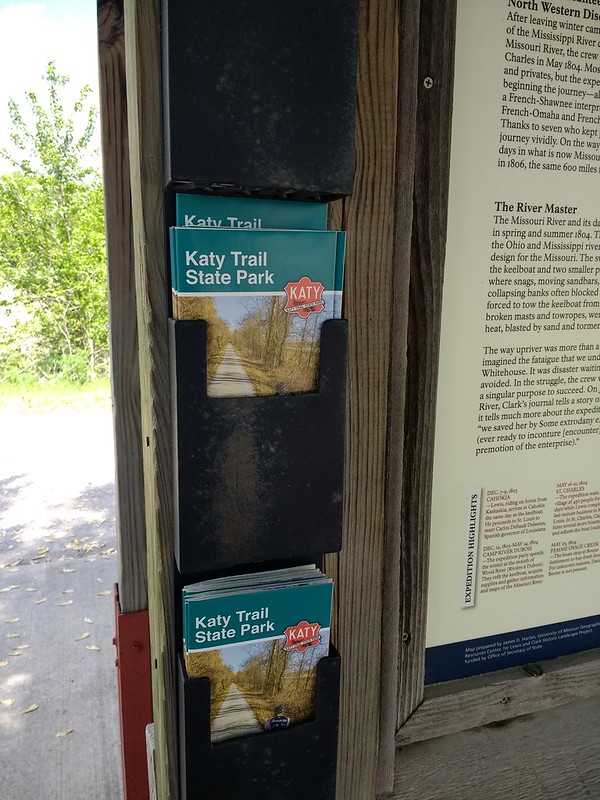 These are my subjective opinions.  Take them for whatever they’re worth.

Questions or comments?  Please contact me using this form:

Click on one of the links below to see where I’ve been recently. Remember, if it’s not on Strava, it didn’t happen… We wish all of our friends and acquaintances a very Merry Christmas and a happy 2018.  Or at least a year that doesn’t have as much dismal national news as 2017.

Georgia and I have spent the year doing the usual things that retired people do; if you follow us on Facebook, you know probably more than we remember!  You can scroll down the posts here to see what some of our activities have included.   I’ve been riding my bike a lot (achieving a goal of 2000 miles this year) and working with my amateur radio (my call is KØGUZ). Terry also has a ham radio license (KEØHNW) and he has had a lot of fun packing it in to mountaintops and contacting other hams, using battery power.  I’m not into climbing a 14,000 foot peak, but if you can drive most of the way there, I’m game.  This is me, my radio and antenna and computer, on an unnamed peak in Utah: Georgia, with the help of  friends, has learned how to quilt, use her sewing machine and play the addictive and very complex game of Mah Jong.  She hosts regular games with three neighbors.

And of course we’ve spent as much time as possible with our grandchildren – three live nearby in Grand Junction, and the youngest lives near Durban, South Africa.  Our oldest just started high school.

We took a couple of weeks to visit friends in North Carolina, and a week with Sue and Charlie Fienning and their friends in Pawley’s Island, and we went to Wyoming to view the solar eclipse.  Paula (Georgia’s sister) saw 90% of it from Cheyenne, but Paula’s husband Michael and I drove north about 75 miles to see the 100% eclipse.  It was awesome. Above:  Michael and me just before we we were abducted by space aliens during the total eclipse.

The population of Wyoming more than doubled as hundreds of thousands of Colorado residents streamed northward to view the event.  It was really worth it.

Our year is ending with a visit from our South African granddaughter and her mommy.   After a couple of days here, they flew to San Diego to be with Jackie. This is our annual Christmas themed blog entry; this year, we’ve taken several trips and most of them are outlined in entries.  Just scroll down and read whatever interests you.  One trip that isn’t mentioned (yet) is one we took to Brooklyn, Iowa to visit a family reunion for members of the family of Georgia’s grandmother Georgiana Kreiss/Mitchell.  It was one of those surprisingly warm and wonderful meetings with people you never knew before with whom you have more in common than you thought.  We combined this with a trip to visit her family in Nebraska, Missouri and Kansas.

Steve has been riding his bicycle a lot – and we even took a trip to Iowa, Minnesota, Wisconsin and Illinois specifically so he could ride on rail trails there.  He’s also been working on the family history – click here to see if you recognize anyone.  If you’re related to us, request a user account and you can find out things about yourself and your family and correct any misinformation.

Like many, well be glad to see 2016 in the rear view mirror.   We hope that you and your family have a very Merry Christmas and a Happy New Year.

Bad Behavior has blocked 7 access attempts in the last 7 days.