It is said that there are only two types of motorcyclists: those who have crashed, and those who will.  I joined the former group on St. Patrick’s day, March 17, when I skidded off the Reeder Mesa road south of Grand Junction on a pleasant evening ride with Larry Johnson, someone I hoped to go riding with in the future.

We crested a hill with an unexpected turn to the right and gravel on the road.  I lost control, the bike skidded over on its right side and came to a halt part way down a ditch.  Fortunately, Larry was able to come back and make sure that I was OK, but I wasn’t, and my bike sure wasn’t. This is my helmet afterwards.  I heard from two doctors and the State Patrol officer who investigated the accident that but for the helmet and the heavy jacket and gloves, I wouldn’t be here today.  We called 911 and the AAA; paramedics showed up promptly, and I rode to the emergency room in the back of an ambulance.  My bike got towed to a junkyard.  After much poking and prodding, the ER doctors said I was one very, very lucky person and had no permanent damage except for a cracked rib and abrasions on the elbow and ankle.  The worst damage was to my ego: this shouldn’t have happened!  Oh, and my motorcycle was totalled by GEICO.  They said that when the right-hand crash bar bent, it also bent the frame.

Motorcycling has been a big part of my life for several years, but this crash made me realize just how quickly a pleasantly exhilarating experience can become a near disaster.  It’s almost 3 weeks since it happened, and I’m still sore.  The insurance money is likely to go to buying a car, not another motorcycle.  It was a good run and I really enjoyed meeting a lot of good friends along the way.  I’ll miss it.  And you. Last Saturday I joined over 640 other motorcyclists in a toy run from the Grand Junction Harley Davidson dealer, about 10 miles to a toy pickup Salvation Army truck in a middle school in eastern Grand Junction. The ostensible purpose of this event was to provide toys for children who otherwise wouldn’t have them, so the price of admission was at least one toy, to be carried in a very, very long line of motorcycles.

The parade began at noon, and we followed a city police car, which means we had the luxury of holding up traffic and going through every red light on the route.  A very surprising number of people came out on what was an overcast but fairly warm day to wave at us and cheer us on. There’s something exhilarating about participating in a mass event like this; everyone involved had a good time.

There may have been 25 non-Harley motorcycles along, but those of us on Hondas, Kawasakis and Indians didn’t feel put down – just overwhelmed. Ages of the riders ranged from 16 to at least 80, and some looked like accountants or retired judges (!!), but there were some seriously tattooed folks. Some wore outlandish costumes, many had on Santa Claus hats.  About the only common denominator was black leather; a lot of cow hides were used to make everybody look good. The rival western slope motorcycle clubs wore their vests with the club name on the back and a forest of pins from other runs they’d participated in, and setting out their (usually extremely conservative and pro-second amendment) political opinions.  I don’t think that the Sons of Silence, Band of Brothers or other clubs are clones of the Sons of Anarchy, but some of the club members could easily get jobs as extras on the show.

It’s hard to capture a mass event like this without a helicopter or drone, but here are a few pictures:

While in Cheyenne, we had lunch at the justly famous Luxury Diner.  Perfectly healthy and Nephew Brian the Vegan Approved … not! 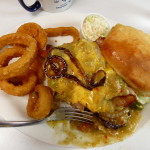 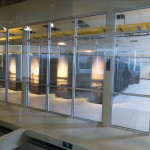 ed the brand new Wyoming Supercomputer, which is the 15th most powerful computer in the world, and is used to research weather and climate change.  This is deeply ironic, because earlier this year the luddite (Republican) Wyoming legislature passed a law forbidding  the teaching of climate change.

Georgia, Paula and Marie worked long and hard to properly center the patches on my new leather motorcyle vest so that I could properly display the logo of our version of the Wild Hogs.

The results were worth the effort: 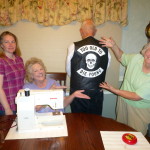 Leaving Cheyenne, I cruised home some 360 miles along the scenic route through Walden, Kremmling and Eagle. 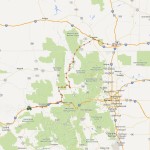 Spring was good to southern Wyoming and northern Colorado; the prairie was emerald green, the streams were alternately bubbling and roaring, and the beaver dams bank full of water.   The sheep and cattle looked satisfied, and there were a lot of prairie dogs and bunny rabbits hopping back and forth on the roadway in front of me. A few of them had become roadkill.

I was startled on my ride up Gore Pass to be approached by five alien creatures who were dressed in head to foot in Lycra body suits, screaming downhill on their skateboards. One wore a complete Spiderman outfit, another a black Batman body suit … complete with winged helmet and cape.  I am glad they were young and sure of themselves, because the Lycra wouldn’t help much with road rash if they’d fallen.   It happened so quickly that I couldn’t stop and get out my phone for a picture…

The Ride the Rockies bike tour had passed this way a day before on a stretch from Steamboat Springs to Avon; the road from Toponas to Wolcott still bore the orange spray painted tour markings and warnings.

Terry and I spend a lot of time online looking for strange and unusual experiences along the American byways.  Yesterday, when Georgia drove from Rifle to visit her sister Paula in Cheyenne, I fired up my motorcycle and took the slow road, to Rawlins, Wyoming and then to Medicine Bow, Laramie and then to Cheyenne.

There were two Scenic Wonders along the route, according to our favorite online resource, Roadside America.  I left I-80 and took the old highway, US 30, to Medicine Bow, home of the Virginian Hotel which served up a tolerable ham (one thin slice) and vegetable (two slices of cabbage leaf) soup, and coffee.  Seven miles east, one comes across the

It appeared in one of Ripley’s Believe It or Not cartoons as “the oldest cabin in the world” and “the building that walked.”    The cabin was built in 1932 to attract tourists to a fuel station, and was constructed of 5,796 fossilized dinosaur bones. 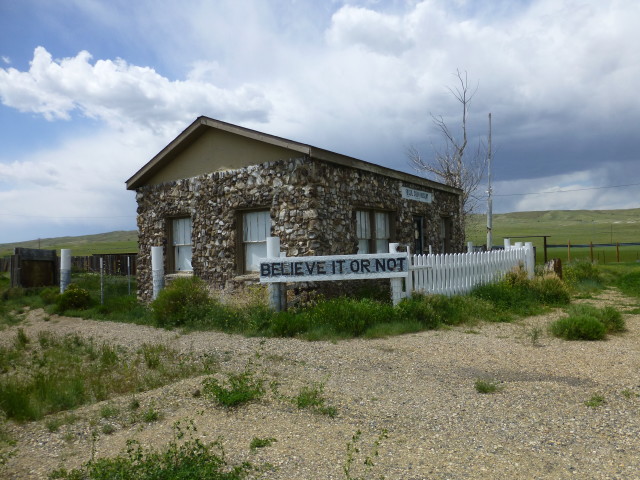 The owner died in 1947, and business fell off dramatically when I-80 was constructed to the south.  The property is listed on the National Register of Historic Places, but that wasn’t enough to keep the tourists coming, and it was closed…but not abandoned.  A couple of security cameras still stand watch.  The only sound is the very occasional car driving by on US 30, and the ever present wind whistling though the prairie. 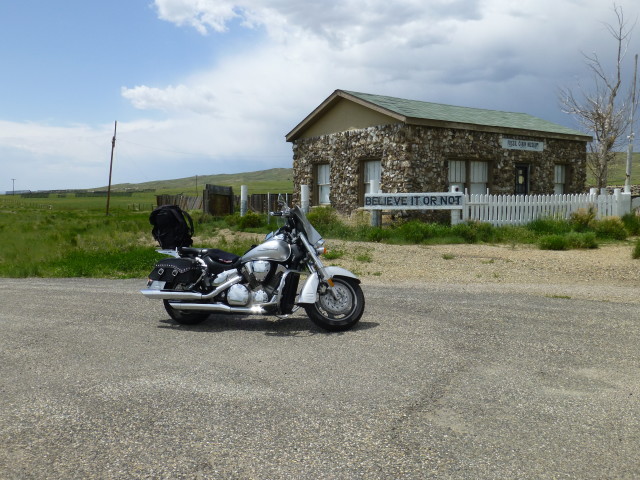 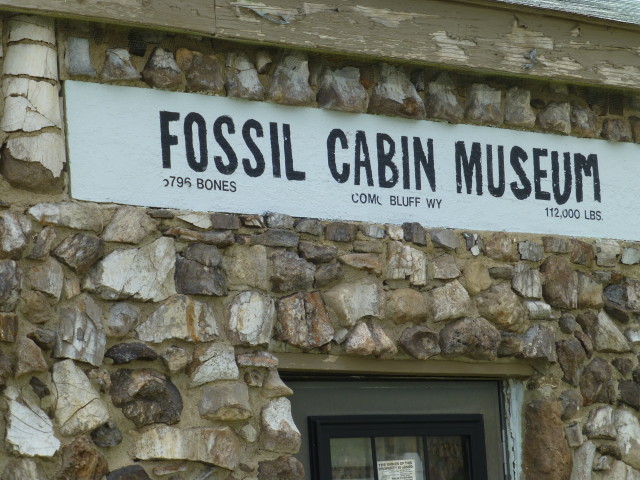 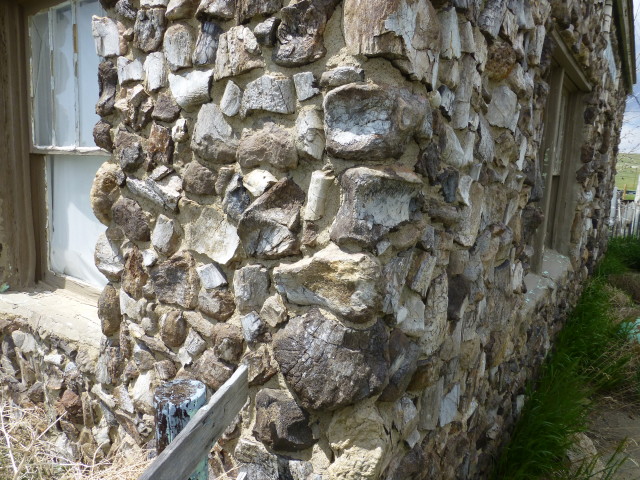 According to Wikipedia, the museum is for sale and somebody may move it to North Carolina.

US 30 was the country’s first transcontinental road, completed over 100 years ago.  Its route ran from Times Square to San Francisco, and the highest point just outside of Laramie, is marked by a gigantic head of Abraham Lincoln on top of a stone spire, overlooking the roadway and the nearby memorial to the president of Packard Motor Car Company who spearheaded construction of the highway.  A loop of this highway ran through Colorado for a few years, but was discontinued in 1928. 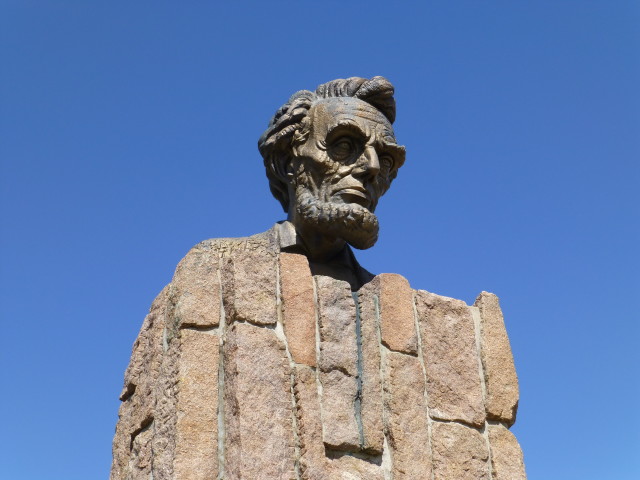 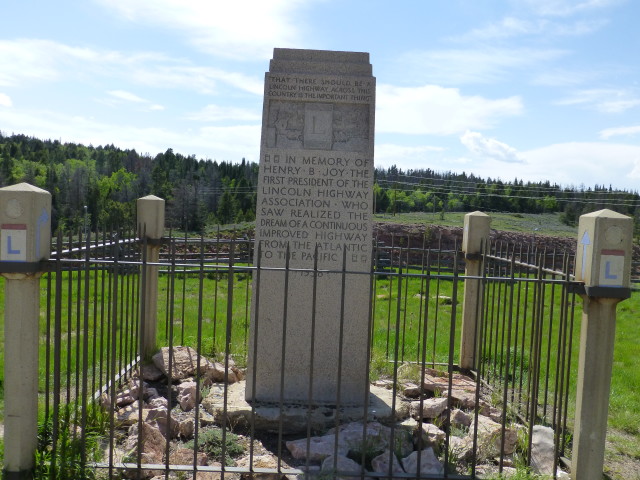 Spring will be here someday. For my first project of the year, I put the 2015 license plate sticker on my bike. Hope I’ll be able to use it soon. 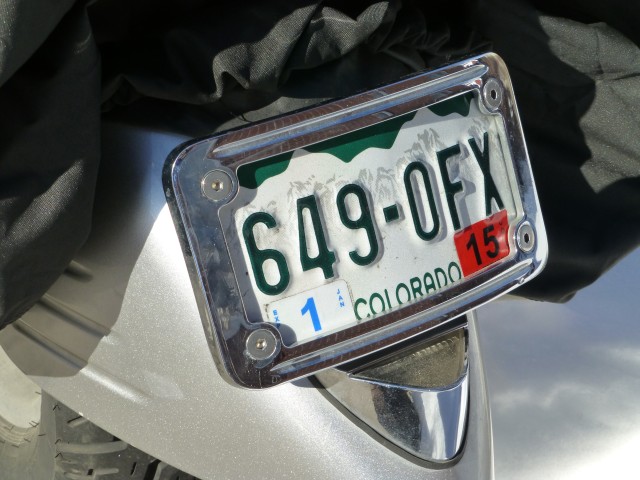 Between February 22, 2012, when I took my motorcycle off its stand for the first time, and December 2, when it went back into its cocoon, I rode 7,167 miles, changed the oil twice and the tires once. All the trips were in Colorado and Utah, and all were made more enjoyable because of the company of  good friends.

During the year, I started to fill the stamps on my National Parks  passport. Many of the trips this year are in posts of their own (click on the category “Motorcycle Trips” on the sidebar if you’re interested in reading about them), but some of the day trips we took were worthy of a magazine article to read on a cold, snowy January day.

Here are a few pictures from some of them.