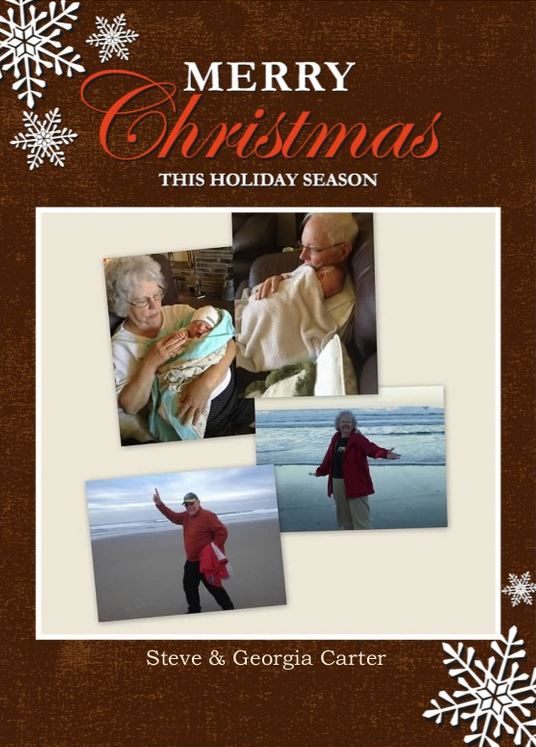 A very Merry Christmas to all of our family and friends.  If you’ve come here to read a traditional Christmas letter, you won’t find one.  This website is a record of some of the things we’ve been doing since 2009, commonly known as a vanity blog. There are millions of them out there on the web, and this is ours.

You are welcome to view everything on the website.  Comments have been disabled, because after I enabled them there were more than 75  attempts by spammers and other evildoers to leave comments and not one legitimate one.  Instead, email me!

First snow of the season today.  Very wet and not very cold. 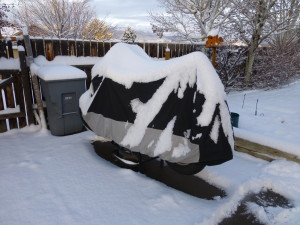 People ask me what we do now that we’re retired. The answer is: a lot, and just what we want to do.

This fall we spent lots of time on Apple’s Facetime watching Felicity grow up in South Africa, took Emily on a trip to visit Paula and her family in Cheyenne, visited with Cousin Sue (and posed in front of a legal Colorado marijuana store…but no, we didn’t buy anything or inhale!), went hiking, visited Cathy and Greg in Oregon and saw several friends along the way.

Felicity is now more than a month old. Here are a few of the pictures we’ve taken of her.

Rugby is a great spectator sport so long as you learn the basics of the rules from someone who has played it. If your only experience is from watching an occasional game on ESPN, it seems like barely organized chaos.  The players don’t hide behind helmets, shoulder pads or any other padding, so when you hear a thwunk from the field, you know it has to hurt.  And they play 80 minutes of solid running, with no time outs for Budweiser ads.

For a whole season, local teams in many of the countries of the  British Commonwealth play hotly contested matches.  There are the Reds, the Blacks, the Blue Bulls, and of course the (Durban) Sharks.  The best players from each South African team are invited to don the jersey of the national team, the Springboks.  It was the Springboks’ victory at the Rugby World Cup was central to the film “Invictus,”

The Boks returned to Durban on Saturday to play Italy last Saturday.  It was a double header, with an opening game between Scotland and Samoa, and a large crowd was expected.  Either because of the high ticket prices (R450 or US$45) or the fact that there was a new ban on bringing your own booze into the stadium, only 30,000 of the 50,000 seats in the Kings’ Park stadium were filled.

Nonetheless, it was a spectacle, and one I won’t soon forget. The opening was complete with fireworks and a Zulu warrior who danced around with a huge spear and spouting fireworks from his shield, and the singing of the SA national anthem (in five languages).  The cheers of the crowd helped me figure out which plays worked and which didn’t.  And they greeted each play by Tendai Mtawarira, a huge player affectionately known as The Beast with growls of “Beast!’  “Beast!”  (Becky met him at a church function, and said that he  enjoyed talking to her about something other than rugby). They cheered every kick by the local-player-made-good, the photogenic Patrick Lambie.  And every try (score) was serenaded by two Scottish bagpipe players who didn’t have much of a chance to play during their game (Scotland lost).

The final score was pretty much as predicted; the Boks crushed the Italians 44-10.  Tim and I went for a(nother) beer and something to eat at a rugby club just outside the stadium; he had a hamburger and I ordered a bunny. (more about the bunny here).  I got the better part of the deal; the R25 (US$2.50) bunny was more than I could eat.  Note the last picture: if you have too much fun at the game, GoodFellas is ready to give you a taxi ride home.

Sunday afternoon we took a ride on the historic Umgeni Steam Railway.

From the brochure which accompanied our tickets:

“The train largely follows the route of the original Natal Governmetn Railway Main Line from Durban to Pietermaritzburg, which opened in December 1880.  Even today the line is considered something of an engineering feat (and an operational challenge) due to the tortuous topography it has to traverse, abounding in 1 in 30 gradients with many curves of 90m radius.  Major engineering challenges along the way included a pass with almost sheer cliffs between Padley’s and Botha’s Hill (providing breathtaking views over the Inanda Valley!); a short tunnel near Drummond and a spectacular cast iron viaduct over the Sterkspruit Valley just before Inchanga.  The notorious viaduct apparently swayed so badly in the wind that that passengers were requested to alight and walk ahead of the train during inclement weather.  It was by-passed by a deviation in 1895.  This line remained the main transport artery between Durban and the Reef until the electrification in the late 1950’s.

The locomotive Wesley was built by the Borsig Locomotive Company in Czechoslovakia in 1935.  Coaches on the train were built between 1928 and 1952.

South African trains use “Cape Gauge“, which is 3’6” or 1.067m between the rails.  It’s just slightly wider than the Colorado narrow gauge; we sat in a second class carriage that had comfy 3-2 seating.  Fortunately, the train was not crowded, perhaps because this wasn’t its regular run…the train had broken down the week before.

The Inchanga station was built in 1892 and has been remarkably preserved.  Several local artisans showed off their wares (and sold a good number to Georgia!) and baked goods.  We made a mistake of eating  mediocre food in a lovely picnic grove when we could have walked a little to the former trainsmaster’s house and had a wonderful lunch with a panoramic view of the area and  a guided tour of their fascinating museum.  I had noticed a little Indian boy with a Thomas the Train T shirt that reminded me of one Josh had worn; he was spellbound by the locomotive, and the engineer hoisted him up and let him peek at the controls and the roaring firebox.

Inside one of the former railway buildings local enthusiasts had constructed a beautifully detailed model train exhibit.  I was dawdling at the museum learning several interesting facts from the man who ran it when my cell phone interrupted with a call from Greg: it was time to leave!  The locomotive had been hooked up to run backwards downhill to Kloof, and we sat on the other side to see the scenic Valley of 1000 Hills before arriving about 4:30 p.m.

Bad Behavior has blocked 17 access attempts in the last 7 days.